The mission of Christ the Savior Orthodox Church is to proclaim and live out the gospel of our Lord, God and Savior Jesus Christ as it has been handed down to us since apostolic times. By the grace of the Holy Spirit, we:

By being faithful to this life, we are transformed into the Body of Christ, bringing the Kingdom of God to all.

THE HISTORY OF CHRIST THE SAVIOR ORTHODOX CHURCH

From the early 1970s, former rector Father Vladimir, Matushka Suzanne Aleandro, and their children were communicants at Three Saints Church in Ansonia, CT. Their pastor, Fr. Nicholas Vansuch, visited their home in Oxford and travelled the surrounding countryside. With a heart for missions, Fr. Nicholas pointed out possible mission sites. Southbury had a growing population and a history of an Orthodox presence, including Churaevka, known locally as Russian Village. There was no active Orthodox church in the area and Southbury was chosen as an ideal site for a mission.

By the late 1970s, the Aleandro family was attending Saints Cyril and Methodius Church in Terryville, CT which was led by Fr. Michael Koblosh. Under his visionary leadership, Terryville experienced much change and dynamic growth including the construction of a new church building. Later, Fr. Michael was called to serve a parish out of state. When he returned and was not yet attached to a new church, he said, “Let’s start a mission!” Fr. Vladimir often shared with Fr. Michael the dream to create a mission in Southbury, a natural progression from Fr. Nicholas’ early vision.

In May 1991, Bishop Job of the Diocese of New England, Orthodox Church in America, gave his blessing to explore a mission station in the Woodbury/Southbury area. On June 16, 1991, the mission station held its first liturgy, celebrated by Fr. Michael Koblosh in the Aleandro home. Services were held for a few weeks at the Aleandros, but they knew they quickly had to find permanent lodgings if the mission were going to grow.

The mission station’s first host was Epiphany Episcopal Church in Southbury which provided their church hall for Saturday evening Vespers. We moved to our next location when Fr. Michael made arrangements to rent part of a building on Route 67 on a monthly basis. The space could not be designated as a church, so it was called the Orthodox Christian Center. The first Divine Liturgy was celebrated in the storefront location on October 13, 1991. A large sign was made with “Orthodox Christian Center – Books Icons” and it was put out on Saturday mornings. Visitors stopped by through the day, looked through the books and icons, and asked lots of questions. Because of our unusual setup, people who would never have walked into a church were introduced to Orthodoxy.

During the next several years, Christ the Savior Orthodox Church was served by several different men of faith. Vladimir Aleandro was ordained to the Deaconate at the mission on February 1, 1992, making him the first son of the parish. Fr. Michael Koblosh continued to serve as Parish Priest and beginning on October 6, 1993, he served as rector of Christ the Savior while also taking on the duties of Liturgical and Pastoral affairs for Holy Ghost Parish in Bridgeport, CT. On June 1, 1994, Fr. Koblosh left Christ the Savior and Fr. Mac Vranes was assigned the duties of Parish Priest. Deacon Vladimir Aleandro was ordained to the Priesthood by Metropolitan Theodosius on June 29, 1995 and served his first liturgy as Rector on Sunday, June 30, 1995.

In August 1995, Fr. Vladimir received notification that we would have to vacate the Orthodox Christian Center and start searching for a new home. While we looked, the parishioners of St. John’s Episcopal Church in Sandy Hook, CT let us use their church on Sunday mornings before their services. By the grace of God, we were able to rent a storefront in the Middle Quarter Mall in Woodbury and moved into it in October 1995. This fourth location would be our home for almost nine years.

In December 1999 Peter and Chezelle Serev donated four acres of land on which to construct a church building, a very generous gift for which we shall be forever grateful. This gift brought us one step closer to realizing the community’s dream of having a permanent home. Our parishioners and many friends enthusiastically contributed to our building fund so that we were able to construct the church from February to August 2004. We moved from our rental space in mid-August 2004 and used another temporary space in the Middle Quarter Mall until we received the Certificate of Occupancy for our new church. The time in temporary quarters with bare walls and only a few icons reminded us that it was not the structure that made us the Body of Christ, but our community.

The first step in building an Orthodox church is the planting of the cross. The cross for Christ the Savior Church was made of cedar by Don Cole, a parishioner. On November 16, 2003 it was planted at the spot where the altar would be in the new church. This cross is now planted in the center of the island in front of the church and is lit throughout the night.

On June 4, 2005 Christ the Savior Orthodox Church was consecrated. During the consecration, the holy table or altar was built using four stones of special significance that truly summarize our history and our community’s vision. The stones were from Jerusalem; St. Nectarios Church, Aegina, Greece; the chapel in Russian Village (Churaevka); and our mother church, Saints Cyril and Methodius Church, Terryville, CT. Metropolitan Herman, Bishop Nikon, Fr. Vladimir Aleandro, and Fr. Michael Westerburg, the Chancellor of the New England Diocese, used one of the stones to hammer the Mensa or table top onto the four columns of the holy table. After completing this act, the stones were placed under the Altar where they are kept permanently.

On July 1, 2019 we welcomed Fr. Moses Locke as our next rector along with his family, Matushka Christy their sons Elias, Seraphim, and Symeon, and daughter Maria. 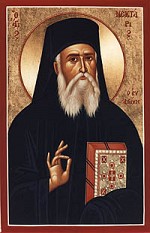